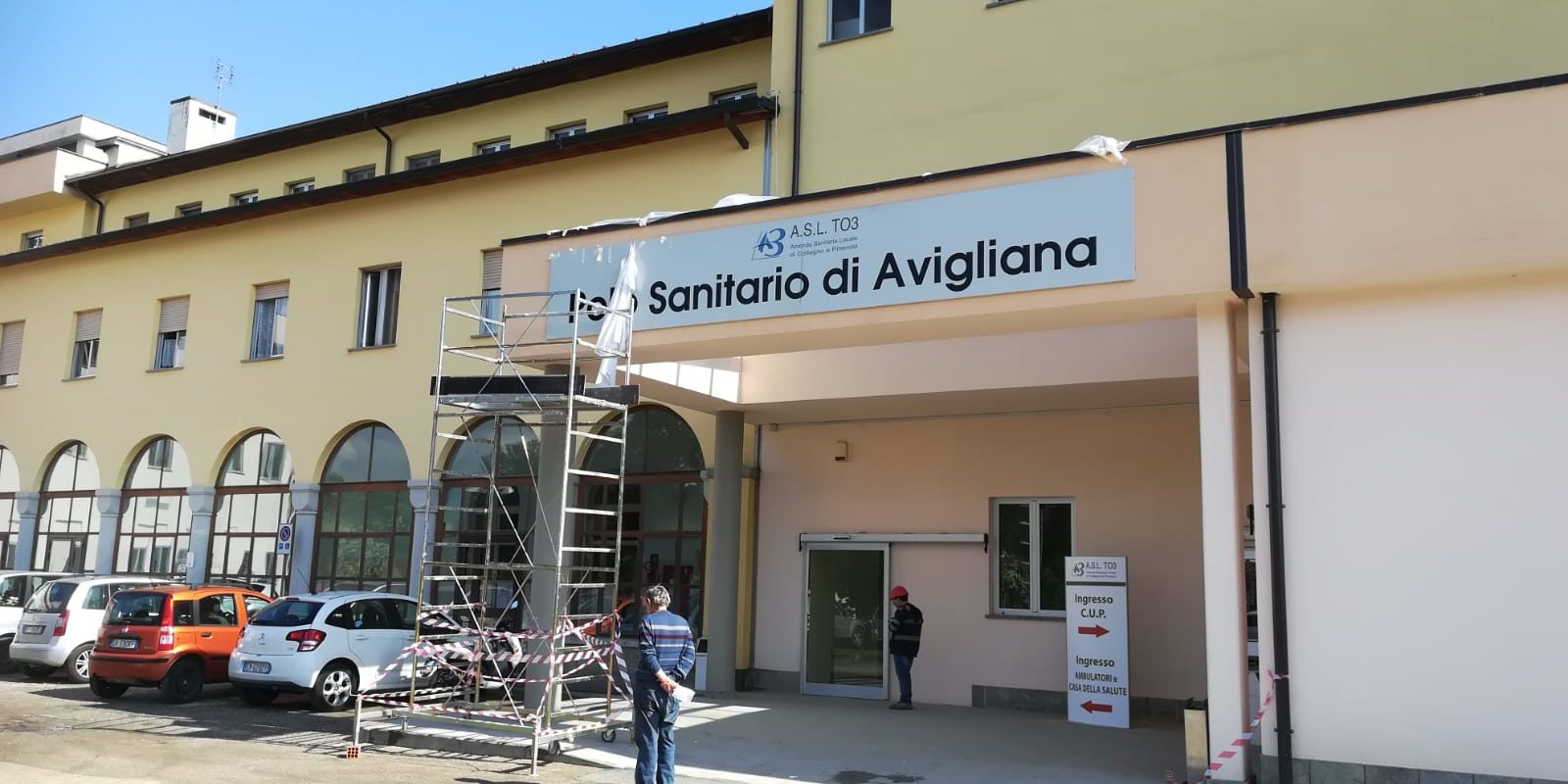 It was officially inaugurated Thursday, May 17, 2018, in Avigliana, the new Health House, a touchstone for the implementation of services in support of those vulnerable segments of the population. It therefore continues, and it takes strength, the conversion of the services offered in Asl To3 and specifically Avigliana, half-way between those ambulatory services of the family doctor and those of greater complexity, possible only within a guarantee structure such as that of the former hospital.

“The opening – said the Mayor of Avigliana Andrea Archinà – is a significant step for the growth of the services offered to a territory that has always stood out for the search for innovative tools for the management of services, whether health or social welfare. The City of Avigliana cannot but be satisfied and we hope it will be even more so as soon as the transition process, still underway and at the center of a continuous dialogue with the Municipal Administration, is concluded. In fact, in this process, the importance of close collaboration with the municipalities is evident, as they are the only ones able to represent the link between the bodies managing the services and the population, whose needs have changed profoundly with an increase in the incidence of chronic illnesses, to whose care this health centre in particular is directed. However, it would be naïve to believe that this process of reconversion would be easy to achieve. Despite the fact that the Avigliana facility has received considerable funding for its functional modernization, it is, in fact, the system as a whole that needs resources for activities that require special attention in mountainous areas. The good functioning of this structure, to which not only the people of Avigliano but all the people of Valsusini are attached, will be more and more guaranteed as long as the need to build a shared path between supra-territorial bodies, ASL and local communities is felt. It is an open challenge that must be taken up with pragmatism and with the awareness that critical issues in terms of economic sustainability cannot be the only planning criterion, but must be intertwined with a more innovative interpretation of the needs required by modern society. We would like to underline the participation of subjects from the territory that guarantee an enrichment of the planning in a transversal way: important is in fact the collaboration with a non-profit organization, the Magnetto Foundation, a business foundation attentive to the needs of the municipalities of the territory.A further reason for satisfaction is the project of school-work alternation in collaboration with the education department of the Castle of Rivoli, thanks to which the rooms of the House of Health have been decorated using the symbol of the Third Paradise by Michelangelo Pistoletto, which in the valley has become synonymous with the idea of regeneration”.

As in the case of the previous Health Centers already activated on the territory of Asl To3, the Avigliana Health Center represents an evolution of the organizational forms already present, in particular the Pcc, the Primary Care Center, which over the years has always allowed a filter for low and medium complexity problems. In fact, more than 10,000 services were rendered in the calendar year, aimed at guaranteeing a proximity service for the population of the lower valley, while at the same time ensuring the decongestion of the emergency room at Rivoli. In its new formulation, the Cap is maintained in total management by family doctors, but its value is expanded to include the orientation of chronic subjects suffering from multiple diseases. The service, extended over 12 hours of the day, will be organized upon referral from the family doctor and will focus on taking care of the chronic patient, who will be offered a schedule of appointments over time, together with constant monitoring – even at home – of the parameters of interest for his or her health. In fact, the strengthening of initiative medicine foresees the active offer of a pathway (diagnostic exams, therapeutic education, offer of services) with active convocation of chronic patients in the territory by the Health House. The aim is the guarantee of autonomy for the elderly subject, the minimization of the risk of hospitalization and the prevention of relapses of chronic diseases from which the majority of the elderly suffer. Among the first services activated will be those for the prevention and management of ulcers in the elderly and that for the management of people suffering from chronic bronchial pneumopathy. More than 20 family doctors will be involved in the new Cap formula, and more than 30 will be functionally linked to the services of the Health House.

The event also provided an opportunity to take stock of the work in progress at the former hospital: the renovation of the former emergency medical service premises (opened last March) and the 112 emergency service premises have been completed, as well as the new porter’s lodge and the installation of the new controlled and telemonitored access system to the square in front of the entrance, reserved for service vehicles and ambulances. New external and internal signage will also be installed by the end of May. Lastly, the renovation of the Cavs is nearing completion, with a rationalization of the spaces, an increase in capacity and an improvement in the humanization of the premises which, redecorated and air-conditioned, will make it possible to welcome even the oldest patients in a more modern and functional environment. These patients, temporarily moved to Rivoli to allow the work to be carried out, will be rehoused in Avigliana in June, as well as, also starting in June, new rooms will be made available for maternal and child health, rooms that will gradually be occupied by the consultancy and vaccination services.

On the whole, therefore, the progressive orientation of services towards the new paradigm of care required by the Piedmont Region will see in the same structure a complex of options ranging from simple diagnostic tests, carried out as an outpatient, to the package of all-inclusive services that the elderly can receive by virtue of enrollment in a path, almost a “health coupon” that will be provided at the request of their caregiver. All this without forgetting the activities of education and health promotion, which will see in Avigliana continue the good collaboration in place with municipalities, the managing bodies of social welfare services and associations in the area. On the sidelines of the presentation of the structure, a set of electrocardiographs was delivered for the execution of remote examinations, an equipment donated to the newborn Health Center thanks to the contribution of the Magnetto Foundation. Thanks to this new portable equipment, it will be possible to continue the testing of tele-cardiology, which includes not only the performance of examinations but also the real-time return of the report from the main cardiology stations of Susa and Rivoli. “With Avigliana – said the General Director of the To3 Local Health Authority, Dr. Flavio Boraso – the process to convert small hospitals into modern Health Homes continues, a process of re-engineering of the regional system strongly supported by Councillor Antonio Saitta. Now it will be crucial to create a real service charter in Avigliana so that citizens can fully understand the possibilities offered and how to access the system, not excluding their own role within the system itself, which must be active and co-responsible in the management of their own health assets. I would like to thank the family doctors for their full collaboration, as they are the protagonists of the new Health Centre and will be the access door and the managers of the paths together with the other health professionals – nurses, physiotherapists, technicians – and the social assistance sector. Today we are not celebrating, as is evident, the inauguration of a turnkey facility, but rather the continuation of a progressive planning process, which in Avigliana will result in a different way of addressing the needs of citizens, no longer the object of health paternalism but rather active players in the management of their care pathway. As emphasized several times during previous occasions, associations and the participation of civil society are the additional wealth of these territories, proof of this is the presence today of the Magnetto Foundation, which once again wanted to confirm its attention by making possible this experimentation of virtual cardiology, another sign of technological and organizational evolution of health services in the To3 Local Health Authority”.

(press release by Asl To3)

Link to the article: http://avigliananotizie.it